The effects of coronavirus go deeper than we might think.  This is not just a blip, but for some, a matter of life and death.
The more we can pull together, praying, and isolating ourselves, the sooner this will end.  Let’s keep our most vulnerable healthy and get food on the table for those who struggled financially even before COVID-19.
-andrew

Coronavirus and Poverty: A Mother Skips Meals So Her Children Can Eat

BRENHAM, Texas — With her six hungry children in the car, Summer Mossbarger was one of the first in line for lunch at the drive-through. Not at a fast-food restaurant, but outside Alton Elementary School. 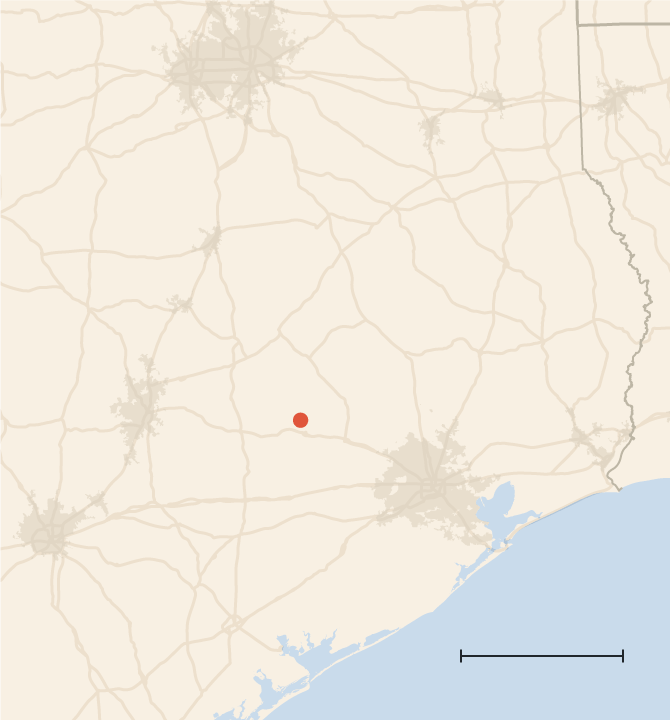 Alton was closed — all the public schools in Brenham, a rural Texas town of 17,000 about 90 miles east of Austin, have shut for the coronavirus — but one vital piece of the school day lived on: free lunch. Ms. Mossbarger rolled down the window of her used, 15-year-old S.U.V. as school employees handed her six Styrofoam containers.

Even as the carnival aroma of mini corn dogs filled the vehicle on the drive back home, and even as the children sat on the porch and ate from their flipped-open containers with the family dogs running around, Ms. Mossbarger ate nothing.

She skipped breakfast and lunch, taking her first bite of food — food-pantry fried chicken — at about 5:30 p.m. All she consumed from the time she awoke that morning until she ate dinner were sips from a cherry Dr Pepper.

Money was tight. Ms. Mossbarger, 33, a disabled Army veteran, does not work. Her husband’s job as a carpenter has slowed in recent days and gotten more unpredictable as people cancel or delay residential construction jobs. She had plenty of worries — paying the $1,000 rent was at the top of the list — but lunch for her children was not one of them.

“If we didn’t have this, I probably would have a mental breakdown with stress,” she said of the free meals at Alton. “I’m not going to let my kids go hungry. If I have to just eat once a day, that’s what I have to do.”

The power of the coronavirus to produce upheaval in people’s lives depends in part on income. Americans with fewer financial resources have fewer options as they navigate the new normal of school closings, shuttered businesses and shelter-in-place orders.

Poverty experts said that in times of natural disasters and large-scale emergencies, low-income families who are already living on tight budgets with overdue bills, unstable housing, poor health care and unsteady employment often bear the brunt of the pain.

“They tend to be the first hit when things go wrong and then also to take the longest time to recover,” said H. Luke Shaefer, a professor of social work and public policy at the University of Michigan and the faculty director of its Poverty Solutions initiative.

Ms. Mossbarger’s self-imposed starvation was one quiet, anonymous moment amid a national crisis, and one sign of the depth of the virus’s impact on the working poor.

The Brenham Independent School District’s free-lunch drive-through was one of many underway this week in Texas, Florida, Pennsylvania, Oregon and other states attempting to ensure that schoolchildren continue to receive free meals Monday through Friday during weekslong virus-related closures. Educators and school nutritionists said that for some impoverished children, the free breakfast and free lunch at school are the only substantial meals they will eat in a day.

In Brenham, where 60 percent of the 5,000 public-school students qualify for free or low-cost meals, the school district handed out more than 1,000 lunches and more than 800 breakfasts to children over the program’s first three days this week.

Brenham is a working-class town, known in Texas as the home of Blue Bell ice cream. Cattle and horses graze in the pastures that line the roads and highways, and the cowboys don’t bother to take off their hats when they climb into their trucks. The town is the uncredited backdrop of countless postcards, posters and Instagram accounts — the bluebonnets are bright and ubiquitous, and even color the grassy medians. But beneath its rustic beauty and ice-cream-company charm lies financial hardship. Brenham has a median household income of roughly $44,000, and a poverty rate of 18.6 percent.

On Tuesday, the long, tranquil driveway outside Alton Elementary was the coronavirus equivalent of an old-fashioned soup line, roughly 10 cars deep. District employees who volunteered to pass out meals recognized some of the drivers — they worked for the district, too, and had brought their children to get a free lunch.

The nation’s free or reduced-price lunch program has long been used as an indicator of a community’s poverty level, but there was no sign of embarrassment, resentment or shame in the drive-through line. Some drivers hollered a loud thank you to the volunteers as they pulled away, and most didn’t even bother to ask what was inside the lunch containers: mini corn dogs, baked beans, baby carrots, an orange. People seemed more concerned with social distancing than any social stigma. One woman kept her driver-side window rolled up as she interacted with the volunteers, to avoid having them get too close to her.

They pulled up in beat-up cars with rattling engines, newly washed trucks, sleek Cadillacs, old minivans. They were white, black, Hispanic. Mothers were behind the wheel of most of the vehicles, but there were a few fathers, too, and high-school students with their younger siblings inside. The only requirement was that children under 18 had to be inside the vehicle to receive the meal, but no one was asked to prove the children attended a district school.

For many of the families, the free meals were not the difference between their children eating or not eating. Instead, they said they viewed it as a way to stretch their budgets a little longer, so that the money they would have spent on that day’s lunch could instead go to tomorrow’s dinner or next week’s bill. Word had spread while families idled in line that the Texas governor was activating the National Guard, that some of the shelves at a local grocery store were still barren. The drive-through at Alton was one small bright spot at an anxious time, even though their county had no confirmed cases of coronavirus.

Gabbie Salazar, 28, made two trips to the drive-through, each time with different sets of nieces, nephews and cousins in her car. She knows Alton well: She manages the school cafeteria. She is a single mother who works two jobs, at the school and at a day care, and makes a total of about $2,000 a month, with a rent of about $800 monthly.

“Save a little money, you know?” Ms. Salazar said of the free meals. “I’m a single mom. I only have to do one meal at night, so that helps a lot.”

Before Ms. Mossbarger pulled up in the drive-through line on Tuesday, she took her six children to the H-E-B grocery store. She went to the aisle for paper towels and toilet paper, but there was nothing left — the shelves were empty, and customers were crowding around to grab whatever they could. She gathered the children, left the cart in the middle of the aisle and walked out, frustrated that she had wasted gas in her Chevrolet Suburban.

“I couldn’t deal with it,” she said of the grocery store. “It stresses me out. Because me as a mother, it makes me feel like I’m not going to be able to provide for my kids.”

Her husband, Jordan Spahn, 47, said they do not have the luxury of stockpiling. When he found out he didn’t have any carpentry jobs on Tuesday — usually, he makes about $180 daily — he worked on a friend’s patio-furniture set to make a few extra dollars.

“We live check to check,” Mr. Spahn said. “We’ve seen those that have more than others be the first ones to get everything they could get their hands on. It shows a little bit of the state of society these days. What if it gets 20 times worse next week, and now we don’t have nothing to get?”

The family moved into a rental home a few weeks ago. Empty fields sprinkled with bluebonnets gave the children space to run around, ride their bicycles and swing from the tire hooked to a tree branch and from the hammock on the porch. Ms. Mossbarger thinks of her military training when she thinks about mealtime for her four boys and two girls — Tristan Spahn, 5; Layla Ray, 6; Stasy Spahn, 7; Hayden Brown, 9; Gavin Brown, 9; and Joseph Brown, 10. “I was a cook in the military, so I’m used to feeding the masses,” she said.

Ms. Mossbarger was raised in Brenham. Years ago, her father was one of her husband’s high school teachers. They laugh about it now and said that’s just how things work in a small town. She wears her devotion to her children on her skin. The tattoo of the Teddy bear on her arm was for 10-year-old Joseph, the initials on her chest for 6-year-old Layla, who is named for the Eric Clapton song.

The spread of the virus, for Ms. Mossbarger and Mr. Spahn, was one struggle in a lifetime of them. Ms. Mossbarger said that years ago, there was a time when she was homeless. Two of Mr. Spahn’s older sons — Matthew, 21, and Jonah, 24 — were both struck by vehicles in separate accidents and killed in the past year and a half. Their pictures and track jerseys cover the walls of the living room.

“We’ve been through some hard times in these past 16, 17 months,” Mr. Spahn said. “We’ve had heartache, heartbreak and now with this coming on, it’s kind of like, all right, bring it.”

The entire meal was provided by Ms. Mossbarger’s sister-in-law and by a food-distribution nonprofit, Bread Partners of Washington County. The children ate leftover spaghetti, canned vegetables, microwave biscuits and Goldfish crackers. Ms. Mossbarger and her husband ate fried chicken with rice and the canned vegetables. The children said grace before their parents even sat down.

Ms. Mossbarger hardly mentioned it, but she was starving. “I honestly wasn’t going to eat, but Jordan was like, ‘You got to eat something,’” she said.

The next morning, she again skipped breakfast and was sipping a Monster Energy drink. She was tired and her head hurt.

Her husband’s job was called off yet again, heightening her financial concerns about the coming days and weeks. “I’m constantly thinking what’s the next move going to be,” Ms. Mossbarger said. “Basically, if he’s not working, I’m going to eat as little as possible because I know that’s less food in my kids’ mouths.”

Soon, it was almost 11 a.m. She packed the children into the Suburban. She was headed again to the drive-through at Alton.